Nigeria’s commercial hub of Lagos is at the center of the country’s coronavirus combat. Lagos has the highest number of confirmed cases (as at April 4) and the state government has continued to roll out multiple measures to deal with the disease.

Lagos has in the past weeks suspended schools across the state – be they public or private, 70% of state government workers were asked to stay at home last week with the most recent move being a week’s closure of shops and markets.

The state, with a population of over 20 million, has also been a major beneficiary of coronavirus intervention funds. Governor BabaJide Sanwo-Olu late last week announced a stimulus package to benefit poor people.

Africanews will put a special spotlight on Lagos and major coronavirus developments coming from the state. Our main Nigeria COVID-19 updates page is also available.

Lagos State Commissioner of Health on Saturday disclosed that the first COVID-19 related death had been recorded in state.

Akin Abayomi disclosed via Twitter that the deceased was a 55-year-old Nigerian male who lived in Holland but returned to Lagos two weeks ago. “He had a kidney transplant seven years ago and also diabetic,” Abayomi added.

“He did not provide full account of his travel history or medical circumstances to the attending doctors in keeping with global trend and to enable guided treatment for COVID-19 related vulnerability due to severe underlying ill health.

He however demonstrated some signs of an upper respiratory chest infection. He later tested positive for COVID-19 but died early hours of April 3rd, 2020 from a cardiac arrest. May his soul rest in peace!” he added.

; male who lived in Holland but returned to Lagos 2 weeks ago.
He had a kidney transplant 7yrs ago and also diabetic.@jidesanwoolu@WHO 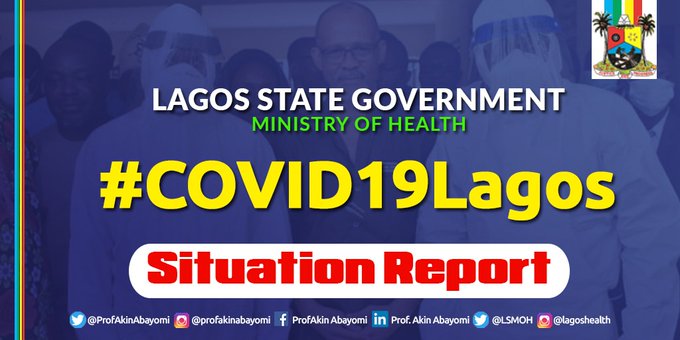 892 people are talking about this

Lagos State Government on Friday disclosed that it will create over 1000 bed spaces in six isolation centres within the next month in preparation for a possible surge in COVID-19 cases.

The state’s commissioner for heath, Akin Abayomi, in his daily briefing said all necessary measures were being put in place to handle an exponential increase in the spread of the virus.

He further explained that Lagos has adequate stock of personal protection equipment to manage the cases, noting that the Infectious Disease Hospital has 70% of its bed-space available.

The State has also commenced training of volunteer healthcare professionals who will be deployed to the newly established isolation centres to complement the efforts of the frontline health workers.

Lagos is the epicenter of Nigeria’s coronavirus cases. Of the over 210 cases recorded as of April 4, Lagos accounted for over 100. Twenty new cases reported on April 3 comprised: 11 in Lagos, 3 in the FCT, 3 in Edo, 2 in Osun & 1 in Ondo.

State governor Babajide Sanwo-Olu has commended Lagosians for respecting the federal government imposed lockdown which started on Monday stressing that it was in the best interest of the populace.

He also thanked the security forces and the frontline medical staff for their dedication in supporting enforcement. He touched on the emergency food response measures which had been extended to over half-dozen local government areas.

“I would like to note the high level of our people’s compliance with this presidential directive. It has shown that we realise the enormity of the challenge that we are facing and the choice that we have made – fighting to stave off a massive attack of COVID-19.

“Our medical staff – exceptional men and women all – are doing their all to ensure that the patients do well, regain their health and return home to their families. We will be doing a lot to encourage them and lighten their burden by staying indoors.

“Those at the bottom of the economic ladder, the underprivileged and the most vulnerable among us, will not be left to fend for themselves at this difficult time, Our Relief Package, which will reach about 200,000 households in the first instance, has continued…

“Parts of the following local governments are being covered: Amuwo Odofin, Epe, Ikeja, Badagry, Ibeju – Lekki, Agege, Oshodi-Isolo, Apapa and Lagos Mainland. Others will soon be reached,” he stressed. 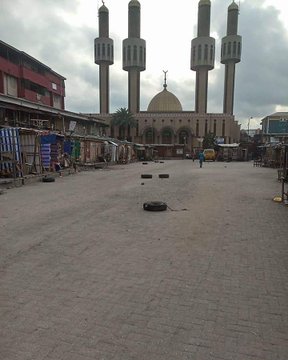 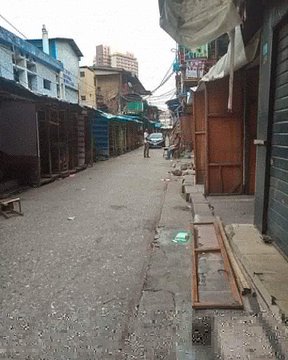 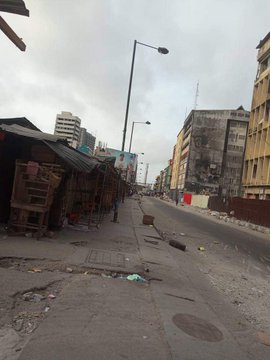 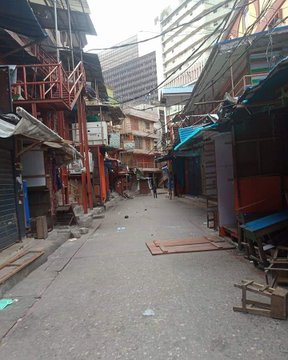 1,404 people are talking about this

Lagos state accounts for 61% of reported coronavirus cases across Africa’s most populous nation as of March 30. Nigeria’s diesease control outfit confirmed the case tally had reached 131.

Out of the number, 81 were in Lagos. The federal government on March 29 imposed a lockdown on Lagos and Ogun States as well as the federal capital territory, Abuja.

Governance must continue during our #COVID19 required lockdown. The Lagos state executive council has moved to virtual meetings that allow everyone participate at the same time. We are fully committed to leading from the front. Please #StayAtHomeAndStaySafe 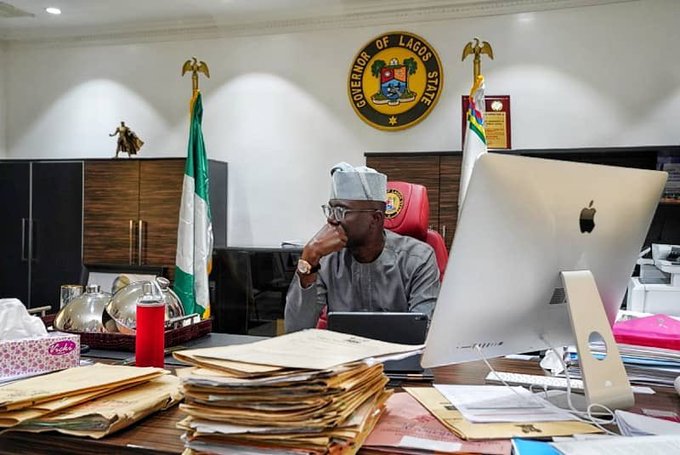 1,089 people are talking about this

Pan-African banking entity, the UBA Group, on Monday redeemed a one billion naira donation to the Lagos State government. The amount was part of a $14 million dollar pledge by the bank to Nigeria’s coronavirus combat.

The donation will provide significant and much needed support to Nigeria and 19 other African countries, by supplying relief materials, critical care facilities, and financial support to Governments. Our support programme will be allocated as follows:

N1 billion to the remaining 35 states in Nigeria

6,502 people are talking about this

“This is really an important intervention and it will go a long way to meet our needs now and in the future to ensure that Lagos continues to remain safe for business.

“We are indeed happy that the bank decided to make this very bold move to support the healthcare delivery system in Lagos and we sincerely appreciate the timely gesture,” the governor said after the ceremony.

Lagos, Nigeria’s commercial hub has been the epicenter of the country’s coronavirus headache accounting for more than half of the national tally which stood at 111 as at midday of March 30. Lagos, Osun state and Abuja have been put under a 14-day lockdown by federal government starting today.

The MD of @UBAGroup, Kenneth Uzoka on behalf of the group Chairman @TonyOElumelu donated N1billion to support our efforts to combat #COVID19.

This is really an important intervention and it will go a long way to meet our needs now and in the future, … (1/2) 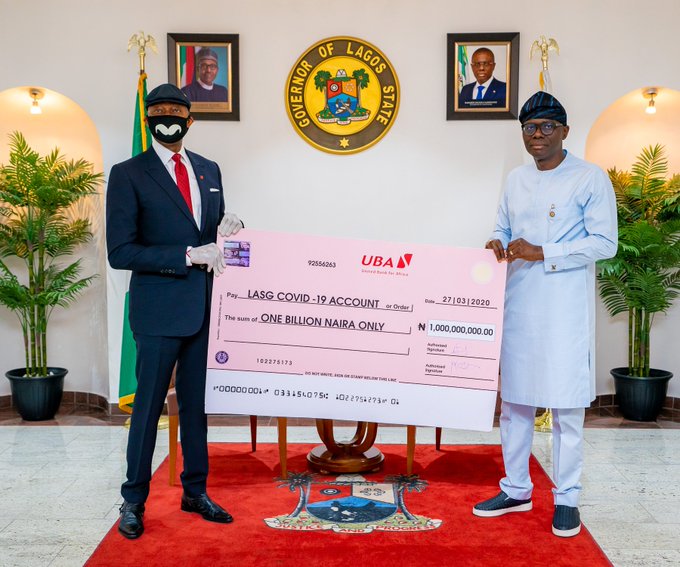 …to ensure that Lagos continues to remain safe for business.

We are indeed happy that the bank decided to make this very bold move to support the healthcare delivery system in Lagos and we sincerely appreciate the timely gesture. (2/2) 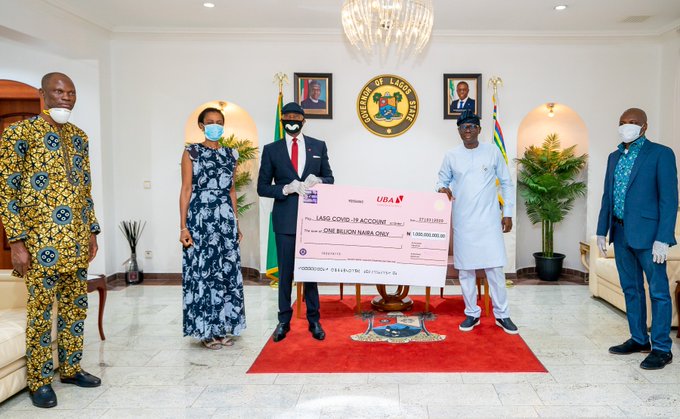 128 people are talking about this

National leader of Nigeria’s ruling All Progressives Congress, APC, Bola Ahmed Tinubu has donated over half a million dollars to the coronavirus combat in the country.

Tinubu, a former Lagos state governor on Sunday pledged the sum of 200 million naira (about $522,000). He noted that the amount was to be split between the Lagos state government and the Nigeria Centre for Disease Control (NCDC).

He also outlined economic measures he believed government needed to undertake to mitigate the impact of the pandemic. March 29 is Tinubu’s birthday which has come to be associated with the Bola Tinubu colloquium, an annual event to celebrate the day. The current pandemic meant that it could not hold.

“Today, but for COVID-19 we would, as we have done for the last twelve years, have celebrated this day with the Bola Tinubu Colloquium. This year we could not but by God’s grace we will do so again,” he said in a tweet before announcing his pledge..

It has usually been attended by top government officials including the President, vice president, state governors and captains of industry from across the country.

2. The circumstances this year prevent us from gathering together to celebrate my birthday but I would still like to mark the occasion.

3. That is why I have chosen today to announce that I will be making a donation of N200m to fight this deadly virus. Pursuant to this pledge, N100m will be made available to the government of Lagos State and another N100m to the NCDC to support their efforts in fighting COVID-19.

417 people are talking about this

The Federal Government on Sunday, March 29, imposed a lockdown on Lagos State as part of efforts to contain the spread of coronavirus pandemic.

The measure which also affects Ogun state and the Federal Capital Territory, FCT, was announced by President Buhari in his first nationwide broadcast over the pandemic.

“Based on the advice of the Federal Ministry of Health and the NCDC, I am directing the cessation of all movements in Lagos and the FCT for an initial period of 14 days with effect from 11pm on Monday, 30th March 2020.

“This restriction will also apply to Ogun State due to its close proximity to Lagos and the high traffic between the two States.

“All citizens in these areas are to stay in their homes. Travel to or from other states should be postponed. All businesses and offices within these locations should be fully closed during this period.

“The Governors of Lagos and Ogun States as well as the Minister of the FCT have been notified. Furthermore, heads of security and intelligence agencies have also been briefed,” the president said in an address that touched on a range of issues around the pandemic.

Key updates below include:

On Saturday Macrh 28, Lagos State Government took delivery of a 110-bed isolation facility on the Lagos Island, where confirmed cases of the novel Coronavirus (COVID-19) in the State can be managed and treated.

The facility was conceived and built in collaboration with the management of Guaranty Trust Bank (GTBank). The bank said it was part of its social responsibility in helping combat the pandemic.

Governor Sanwo-Olu allayed the fear of the residents over the growing cases of the disease, saying the State was working assiduously to stem the rate of transmission, especially by those who returned from abroad.

The Governor hinted that there had been improvement in the recovery of some patients currently isolated at the State’s Infectious Disease Hospital (IDH) in Yaba. He said the State would continue to build capacity to enhance its response strategy and actions towards containing the pandemic.

The bank’s CEO Segun Agbaje hailed the State Government for accepting the collaboration offer in building the structure, noting that half of the resources used to build the facility was donated by Africa Finance Corporation.

He expressed optimism that the effort would strengthen the capacity of Lagos to stop the spread of the virus. The isolation facility, which sits on an expansive area in the Mobolaji Olufunsho Johnson Stadium in Onikan.

It is divided into operational sections, including Intensive Care Unit (ICU), regular-bed wards, pharmacy department, doctors’ quarters and consulting rooms. The facility is also equipped with ventilators for the use of patients that may develop acute respiratory symptoms.

Residents of Mokoko in dire situation amid COVID-19